A purposeful and playful workplace with a backbone of functional necessity facilitating a vibrant, flexible workforce.

Planned with clarity, the design communicates youthful exuberance aimed at capturing the hearts and minds of a global audience.

Since 1989, New Zealand’s national broadcaster, TVNZ, has occupied its now-trademark headquarters on the corner of Victoria Street West.

Darkly futuristic when it was first built, the building has a fairly complex interior — the submerged, iceberg-like bulk consists of two sub-ground levels, a street-level entrance and atrium, and four upper storeys with successively smaller floor plates, creating a stepped, pyramid effect when seen from the street.

Warren and Mahoney, which designed the original building, was called in to remodel it to better respond to contemporary workplace expectations and the changes wrought by the birth of fast-news, digital media — all within the context of a state-owned entity.

Times have changed significantly since the 1980s, and nowhere is this more apparent than in the media industry. TVNZ bills itself as “the home of New Zealand storytelling,” but the physical structure of this home hadn’t evolved alongside the story.

In the past, TVNZ’s challenge was to get the scoop and “break” stories in a daily news cycle. Today, news moves faster. The challenge is to produce content in a constant flow, and make it available on-demand. Both reporters and audience are increasingly mobile.

In 1989, secrecy was paramount — getting to the story first was what business thrived on. The building was a physical barrier between the outside world and the newsroom on the lower two floors, both to protect information and the physical safety of reporters and newscasters.

But as the years passed, the internal layout become more fragmented and bunkered. When he came in for weekly briefings, even former Prime Minister John Key described it as “a confusing rabbit warren of a building”.

The main concern was making the building representative of the culture they aspired to have going forward. Scott Compton, Principal

Behind its impenetrable, black-glass street façade, the ground level entrance delivered visitors into a narrow atrium that simply came to a dead end. One concession to morale was a small coffee cart, but otherwise the occupants of a building designed to hold 1,000 staff had few chances to encounter one other or connect with TVNZ’s core work.

“The staff were all locked away in separate areas, so the culture hadn’t changed since the 1980s,” says Warren and Mahoney Principal, Scott Compton. “The main concern was making the building representative of the culture they aspired to have going forward.”

“This place needs to be more open and live”.

The architectural team adopted this quotation, made by a TVNZ staff member at an employee Q&A, as their mantra.

For security reasons, the building cannot be literally open to the public, but Warren and Mahoney used the concepts of “open” and “live” to guide their approach to redesigning the interior to better facilitate the new media culture. It also allows TVNZ to occupy the space as a media brand that communicates consistently with employees about the work as it happens, rather than being a blank, generic corporate backdrop.

“The internal architecture had to provide connection within the business. It needed to feel like the people within the building could go anywhere and connect to anyone,” says Compton. W&M began by creating a forecourt and entrance that visually opened the building to the street, installing a glass revolving door and discreet, card-operated security speed-gates, similar to those found on the London Underground.

A large mural by local stencil-graffiti artist Flox greets visitors. Specially commissioned along with three other artworks, two of which are located at the Victoria Street Entrance and on L4 in Blacksand by Andrew J. Steel and one in Production belonging to Greg Straight, it connects with a youthful, creative and distinctively New Zealand sensibility.

Next, Compton and his team worked on the atrium. Using the film Bladerunner as a visual reference, they created an immersive, neon-lit space that captures the hum of a 21st century media environment, with a cinematic flourish.

Play, Pause and Stop motifs that hark back to TV’s formative years, and an On Air sign to conjure up the exciting moment that media goes live. Scott Compton

The architects removed a huge amount of concrete from the upper levels, replacing it with glazed sections to allow the building’s residents to see straight through the heart of the building.

The atrium was conceived as a narrow laneway between two different buildings (another Bladerunner reference), which leads to another new view — a vantage point through which the newsroom below can now be seen, often running at full tilt.

The two vertiginous walls that frame this lane were treated differently, to give the effect of two buildings facing each other. One is clad in warm timber, and the other is concrete and glass, with live screens and neon signage — “Play”, “Pause” and “Stop” motifs that hark back to TV’s formative years, and an “On Air” sign to conjure up the exciting moment that media goes live.

“Usually atriums are designed to be white, airy and full of natural light,” says Compton. “This is not like those atriums, and that’s precisely the point. The darker it is, the more useful it is to them as a filming backdrop. So the atrium is now what the people who live in it want it to be — dark, buzzing and tangibly about entertainment.”

The second step was to replace the existing coffee cart with a permanent café serving healthy, modern food and coffee, which has turn the area into an activated, populated space where TVNZ’s community, staff and freelancers can connect.

While the newsroom still requires a certain amount of security, the architects introduced large gallery windows that give views down from the atrium, and secure “bridges” above it that lead to staircases down into the heart of the action.

“The idea was that people could feel like they were involved in this part of the business without disrupting it, both because the news is what the whole business is built on, and the newsroom physically anchors the building,” says Compton.

Below, all of the different news teams have been brought together from previously disparate locations around workstations in a hub-and-spoke model, with each editor at the centre.

“We took some of our cues from the new BBC studios, says Compton. “In this huge, triple-height space, you can look down and see the people you’d recognize from the news, the nationally known faces. That is the “Live” component of the project, because being able to walk across the top of the newsroom when something big has taken place, and seeing and feeling the energy of the production teams working full tilt, is compelling. It doesn’t leave you in any doubt about TVNZ’s role in the new media landscape.”

In the cell-like workspaces on the building’s four upper levels, the architects removed interior walls and created new floor plans that dispensed with individual offices, and where no work point or enclosed room abuts a section of external glazing. Workstations are now all adjustable, so staff can choose to sit or stand.

“Part of that was to make the space more flexible,” says Compton. “But it was also a more democratic gesture, where it wasn’t about hierarchy and real estate, but being more visible and in contact with your peers. Everyone can share the views.”

New social spaces, including slick communal kitchens and dining areas, and outdoor decks on the building’s previously unused upper terraces, support this new sense of community on each floor. The staff bathrooms on each floor were extensively remodeled to bring them up to date, with subway tiles and glass. 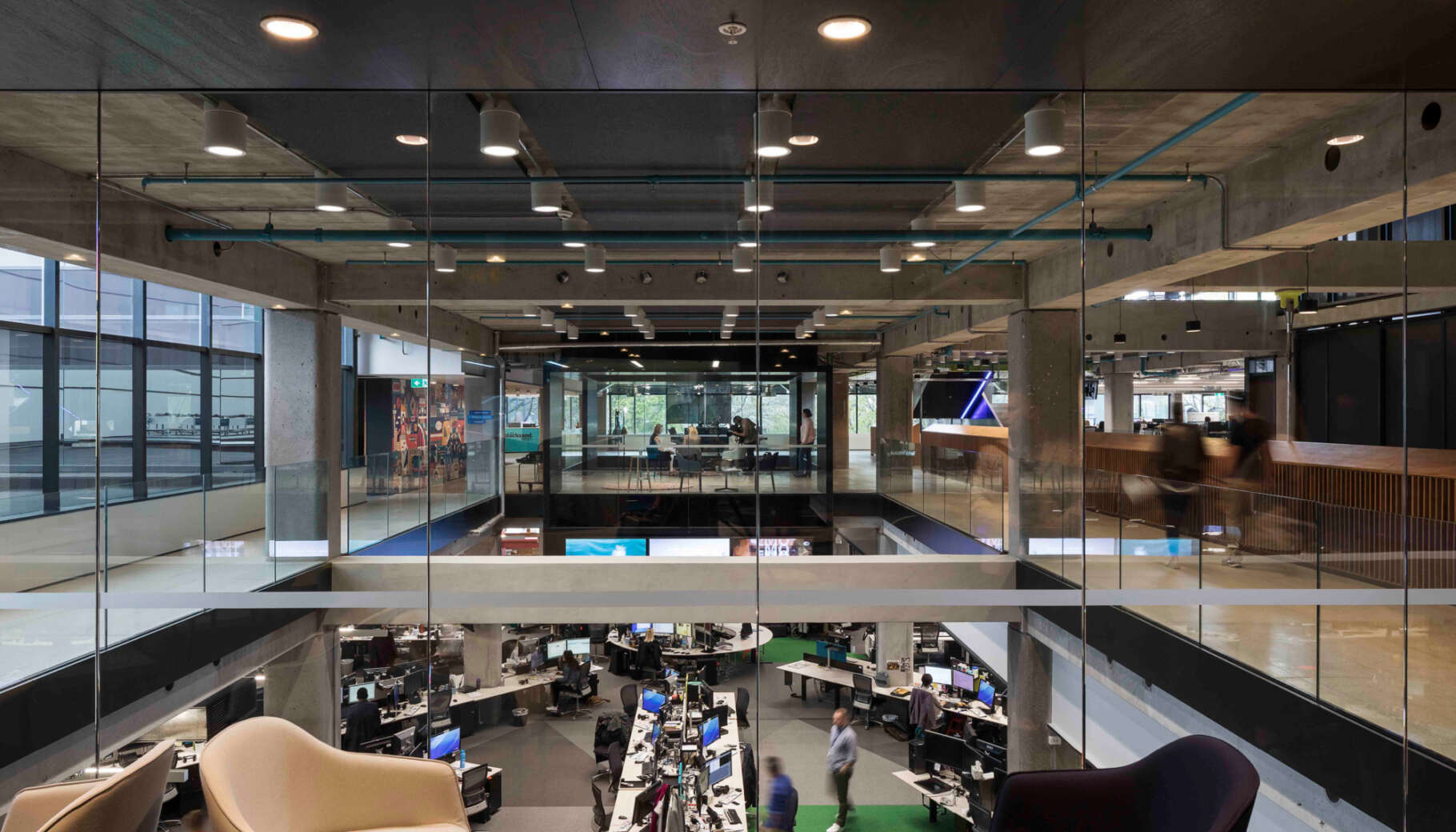