The Supreme Court of New Zealand

The new Supreme Court of New Zealand called for a building that would borrow from the best architectural and legal traditions of the past and re-present them in an expression of open justice for a new era.

Client The Ministry of Justice

Located opposite Parliament on one of Wellington City’s most prominent sites, the Supreme Court building shares its immediate precinct with the original (and at the time of construction, unoccupied) Old High Court Building, which dates from 1879.

In 2008, Warren and Mahoney was engaged to create a completely new building that would be the court of final appeal in New Zealand, with the role of maintaining overall coherence in the legal system, and addressing issues that would have previously been passed on to the Privy Council in the United Kingdom.

The move had, in itself, been a contentious one, says Bill Gregory, the project architect, so the building was always destined to attract public attention.

To answer this, his team worked in consultation with the court judges and Ministry of Justice staff, in order to design a building that “steps forward purposefully to address the need for our own governance of legal issues,” says Gregory.

The project also aimed to establish a common ground between the old and new buildings, to pay respect to earlier legal traditions while creating the basis for a contemporary institution that reflected the distinctive identity and jurisprudence of New Zealand.

Rather than creating a tall, commercial tower, the architects’ goal was to design a structure that felt ‘small and special’.

While this initial brief also addressed the judges’ needs for privacy, security and shade, there was a subsequent discussion about reflecting a quintessentially New Zealand identity through its relationship with the landscape.

The architects began by considering how the new structure would sit in relation to the old court, with its solid, symmetrical bands of masonry. They decided the best way to integrate the two was to copy over some of this symmetry, in terms of the massing and floor levels, but also to provide a contrast.

This was achieved using a concrete frame covered by the court’s most striking public feature: the exterior screen made of extruded, recycled bronze. This was developed in collaboration with Neil Dawson, a prominent New Zealand artist, in the shape of abstract, windblown pohutakawa and rata trees. In Māori culture, these trees signify the protective wisdom of community elders.

We’re aiming for a hundred-year design life, so the bronze won’t require any maintenance for a long time, but will continue to darken and oxidise Bill Gregory

The interior spaces were similarly recalibrated to meet the demands of a modern courthouse. The grand, sky-lit courtroom lies at the centre of the building, with the ancillary chambers, library and core administrative section arranged around the outer edges.

The team located the judges’ chambers on the first floor, as it gave them a freer rein with office space by putting the occupants out of direct visual contact with the street, thus allowing for large windows.

The chambers act as clusters of spaces for the judges and their support teams. Though they all have good natural light and nearly identical dimensions, the layout, furniture and artwork are specific to each judge. The chambers were also extensively fitted with built-in joinery for the judges’ many books and papers.

In total, the courthouse contains a total of 2.5 linear kilometres of bookshelves for its extensive judicial library, a necessity that became one of the primary factors driving the design. As well as those in the judges’ chambers, the walls of the circulation area above the chambers are entirely lined in shelves.

The team chose an internal palette of materials that were natural and as far as possible, local and sustainable (beech, concrete and bronze), and that would age gracefully, over time acquiring a rich patina that both contrasts and relates to the dark timber and plastered brick used in the Old High Court Building next door.

Southern beech timber was used throughout the building interiors to give a sense of warmth and enclosure, particularly in the courtroom, the elliptical inner surface of which is clad with 2845 panels of silver beech, generating the smooth surfaces that would produce the acoustic properties demanded by the brief.

This design of this soaring, imposing central space was based, loosely, on the spiral patterns of the cone of the native kauri tree, a totemic tree in both Maori and European culture.

“When it came to the courtroom itself, the judges requested three things,” says Gregory. “Natural light, good acoustics and for there to be no visual distractions.”

Driven by the desire to make the courtroom special in terms of scale and centrality, the first plan was for an orb-shaped room distinct from the rest of the concrete building, with a copper exterior and timber interior that echoed courtroom tradition, without replicating its form.

The plan developed over time as the architects factored in various requirements including security, public access and services. Acoustics played a major role in defining the design, and the resulting articulated spiral-and-triangle pattern of the courtroom was actually based on the strict parameters around speech acoustics, modelled by Glenn Leembrugen of ICE Design in Sydney.

The oculus-like skylight, says Gregory, fits with the idea of justice illuminated from above: however, the motivation was also to provide judges with natural light and a view of the outside world during long hearings, “even if it is just to see clouds going past very rapidly, in Wellington’s case.”

In keeping with the concept of an open and transparent court, a window in the wall opposite the judges’ bench facing onto Lambton Quay allows the public to literally see justice being done.

The Old High Court now functions as a civil and environmental court, and houses education, service and meeting facilities. The new Supreme Court stands in a shallow pool on a basalt-clad plinth, putting it on the same level as the historic building, a nod to the idea that the NZ Supreme Court system will continue to be strongly influenced by its common ground in English law, and creating an evenly sized, mutually respectful twosome at the commercial end of Lambton Quay. 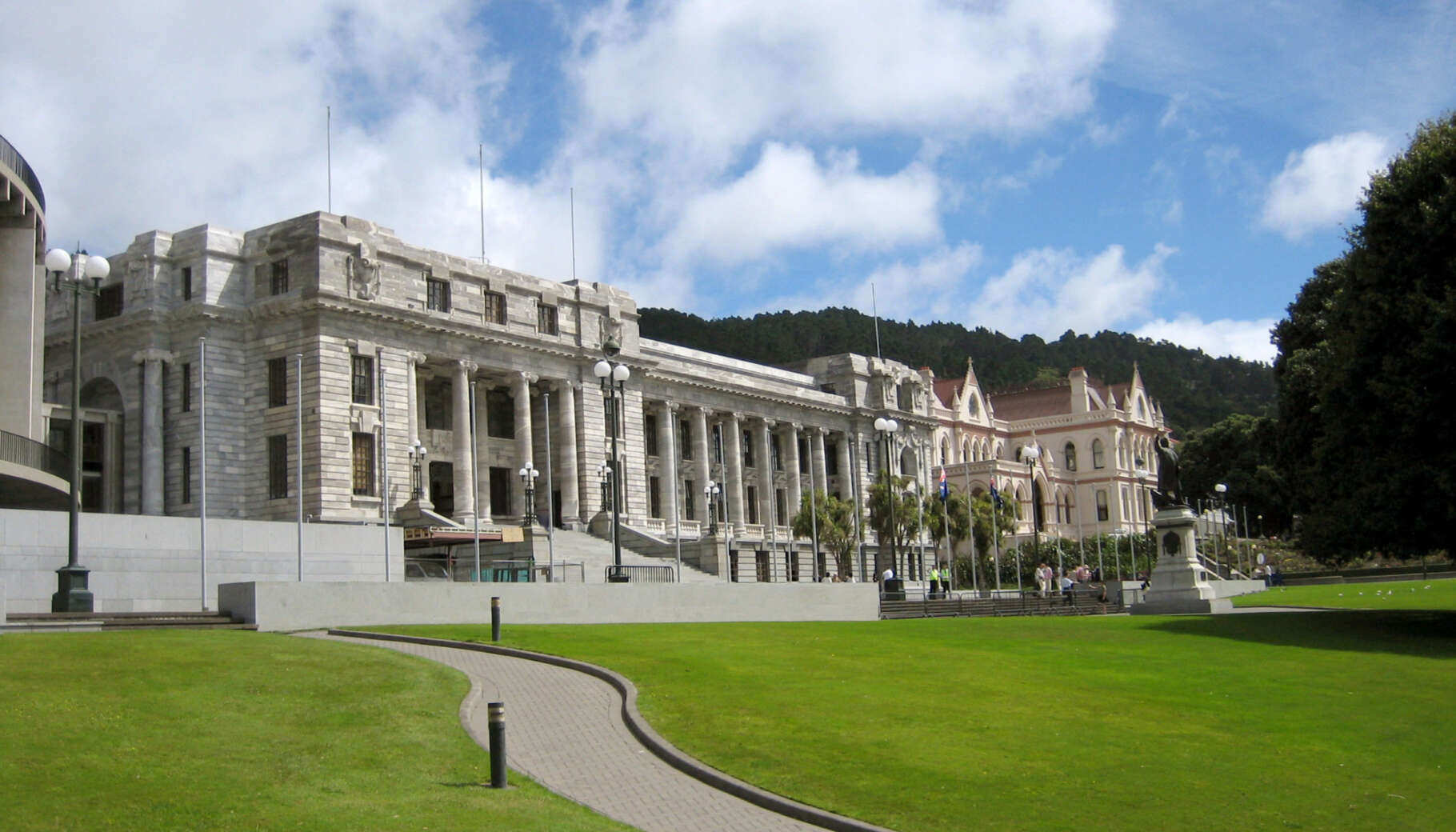