Combining progressive design and environmentally friendly features with the requirements of a modern school.

<p>Combining progressive design and environmentally friendly features with the requirements of a modern school.</p>

Kristin School is, in essence, three schools – a primary school, a middle school, and a senior school – nestled within one campus. Over the past decade, Warren and Mahoney has undertaken two major projects for this innovative organisation.

The first project, completed in 2004, was an Information Centre and Library. This takes the form of a rectangular east wing and a larger, curved west wing, with the two wings linked by a gallery. The east wing houses the school’s administration area at ground level, with a junior library and associated teaching spaces above. The west wing houses a senior study and common room at ground level, with a further library on the first floor.

In keeping with the school’s green ethos, the building’s form and orientation maximises the benefits of solar gain as the sun moves around the building. Extensive north and east facing glazing maximises winter sunlight, while air-foil louver blades or composite aluminium-clad blades at high level shade the interior from the summer sun.

All linea fluorescent luminaires use energy-efficient T5 lamps. Automated lighting control conserves energy use in intermittently-occupied spaces. Lights adjacent to the extensive perimeter glazing are linked and controlled via photocells which automatically turn off the lights when there is an adequate level of natural daylight.

In addition to providing daylight, a series of roof lights promote summer cooling, naturally extracting air from the interior. Electrically-operated sashes located within the roof lights generate a draught stream which draws the warm air out of the space. Overhangs for roof lights ensure spaces can be ventilated without the risk of rain entering.

Low-level external louvers, equipped with motorised dampers, combine with high-level motorised sashes in the roof lights to enhance ventilation during the day.

During summer, the only areas with mechanical ventilation are the computer room of the senior study, the senior library computer area, and the junior library. These are areas where equipment requires a controlled atmosphere, or where acoustic separation is required between adjacent naturally ventilated spaces.

The second project, a Humanities & Commerce Faculty and Middle School Learning Centre, was completed in 2009.

The high profile site of the new development – bordering a predominantly residential area and North Shore Golf Course – provided an opportunity to show off the school to the wider community. At the same time, the extent of the site enabled large distances to be maintained between the new buildings and the neighbouring residences, and ensured that the neighbours’ visual and aural privacy would not be adversely affected.

The new classrooms would be in addition to the original classroom blocks established when Kristin School opened in 1973. The first stage, the Humanities and Commerce Building, would include six humanities classrooms, six commerce classrooms, faculty administration and resource areas, an ICT hub, a reception area, and workspace.

The classroom block is comprised of three wings, inflecting to optimise the north-orientated court, sheltering it from winter south-westerly winds and opening it to summer breezes. This green, landscaped space forms the heart of the Middle School development. Combined with the landscaped court between Stages One and Two, it helps to reduce the apparent mass of the development. A maximum depth of one classroom also ensures that natural light and ventilation are optimised, while creating a transparent learning environment.

In addition, the building form and material palette of precast concrete and cedar rusticated weatherboard plains, linked by an atrium and structured landscape, continues the architectural language established in the earlier Library and Information Centre. 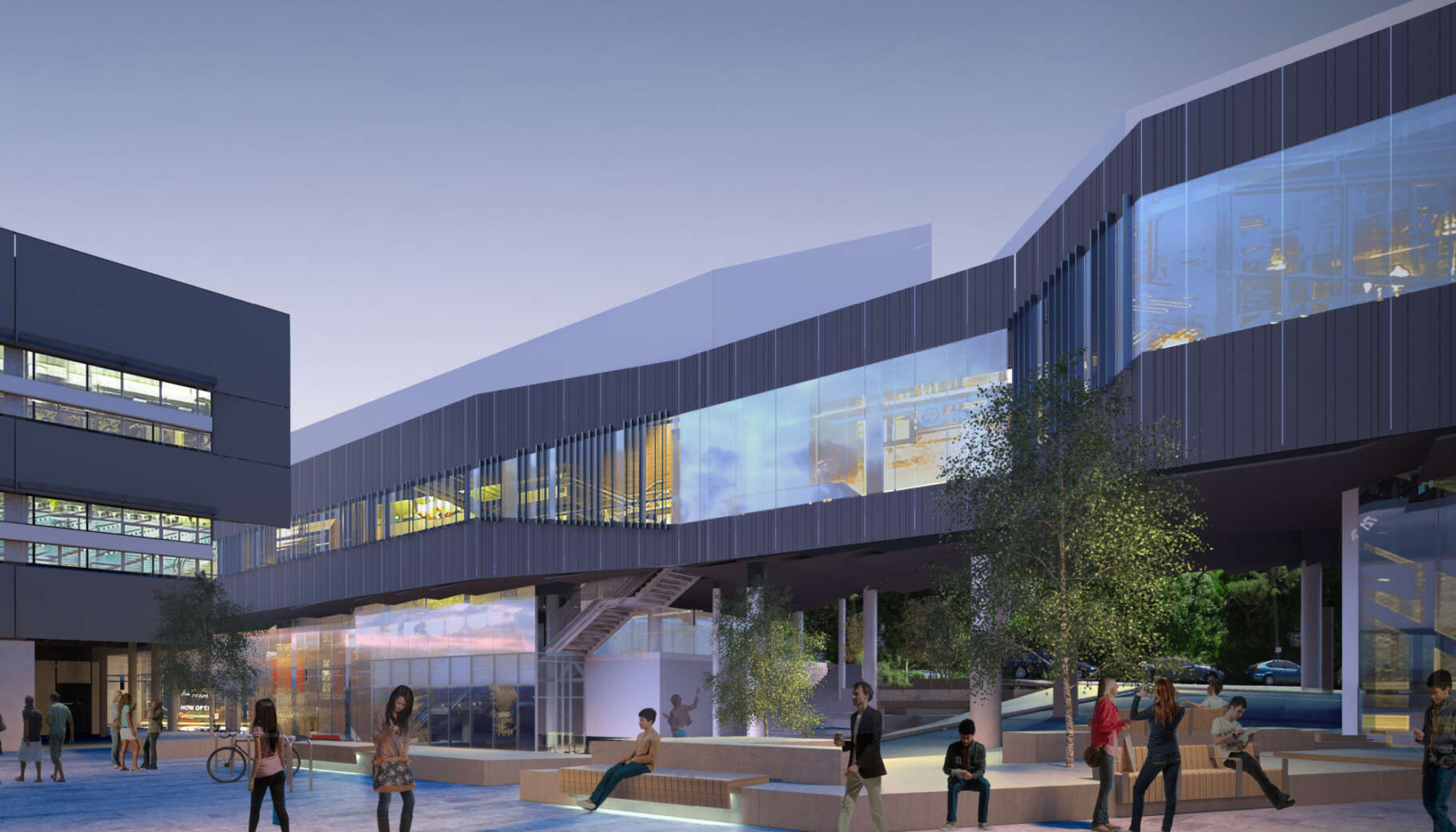